Head of the Lab 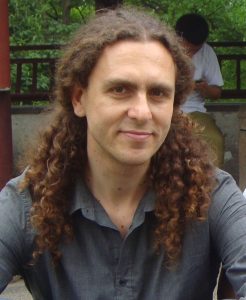 Dr Panagiotis E. Keivanidis, born 1976 in Pireas Attica (Greece), studied Chemistry at the Universities of Crete and Utrecht, specialized in Optical Spectroscopy and graduated with a bachelor’s degree (Ptychion, 4-year degree) in Chemistry from the University of Crete in September 2000. He then joined the research group of Prof. Dr Gerhard Wegner at the Max Planck Institute for Polymer Research (MPI-P) in Mainz and earned a doctoral degree (dr. rer. nat.) in Physical Chemistry from the Johannes Gutenberg University in January 2005. His PhD research focused on the use of time-resolved photoluminescence spectroscopy for the study of electronic energy transfer processes in π-conjugated polymers and their blends. He continued his research on the development of organic electronic devices as a post-doctoral research associate; in the group of Professor Sir Richard Friend at the Cavendish Laboratory in Cambridge (2006 – 2008) with funding from the British Engineering and Physical Science Research Council, where he conducted systematic device engineering studies for the development of low-dark current organic photodetectors; in the group of Professor Jenny Nelson at Imperial College in London (2008 – 2010) with funding from the British Petroleum, where he studied the process of charge photogeneration in organic photovoltaic composites with the use of transient absorption spectroscopy. Next, he moved to the Center for Nanoscience and Technology of the Italian Institute of Technology in Milan (2010 – 2014) as an independent Team Leader. There he established and lead the Device Technology and Chemical Physics research group while he was holding an Intra-European Marie Curie Fellowship (DELUMOPV PIEF-GA-2011 299657, FP7/2007–2013). In that period, he served as a Marie Curie Ambassador for the dissemination of European scientific activities in the field of Organic Electronics by visiting high schools of southern European countries (Spain, Greece, Portugal). He was a visiting scientist in the Chemical Physics Group, at the Chemical Centre of University of Lund, Sweden and in the Organic Optoelectronics Group at MPI-P.   In September 2014, Panos transferred the Device Technology and Chemical Physics research group to the Department of Mechanical Engineering and Materials Science and Engineering at the Cyprus University of Technology where he holds an Assistant Professor position. He has delivered numerous seminars in international conferences and research centers and he participates in four patents. He is the author and co-author of more than 50 peer-reviewed scientific publications. He has graduated 4 PhD students and currently he supervises 2 PhD students. At present he participates in two research projects funded by the Research Promotion Foundation in Cyprus; he is the coordinator of the project LOSPHOGEN (EXCELLENCE/1216/0010) and he contributes as a research collaborator in project DIACTMOND (EXCELLENCE/0918/0215).

Prof. Keivanidis focuses in the field of nano-engineered organic optoelectronic devices by combining a strong expertise in the study of photophysical and physico-chemical properties of organic composites as a function of their layer structure. His research relies on the use of spectroscopic and electro-optical characterization tools to study the electronic properties of organic nanostructured systems that can be used as functional materials in organic devices for photodetecting (OPD) and photovoltaic (OPV), applications. He pays special attention on the fabrication protocols that facilitate the engineering of aggregate formation, polymorph distribution and molecular configuration in photoactive and electroactive layers prior to their integration in device architectures. Emphasis is given on the development of fullerene-free organic solar cells and on the optimization of solid-state organic photon up-converters that operate via triplet fusion photochemical reactions. 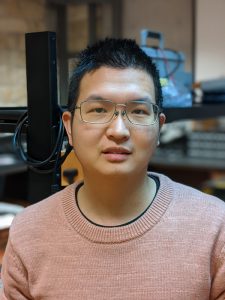 Peisen Yuan was born in China in 1991. In June 2014 he graduated from Jilin University with a Bachelor’s degree in Semiconductor Materials and Device Physics. He then joined the research group of Prof. Ma Dongge at the Changchun Institute of Applied Chemistry to earn a PhD degree (2014-2019). His PhD research focused on the development of organic electronic devices such as organic light-emitting diodes (OLEDs), organic photo-detecting devices (OPDs) and spin-related devices for addressing their response on magnetic field effects. Within his PhD project he aimed to understand how externally applied magnetic fields affect the performance of charge-transfer exciplex based OLEDs. Currently, he is a post-doctoral research associate in the Device Technology and Chemical Physics Laboratory group of Prof. Panagiotis E. Keivanidis at Cyprus University of Technology. His research work aims to the sensitization of OPD architectures through the integration of solid-state photon up-converting layers in the device architecture. Up to now he has authored and co-authored 7 peer-reviewed scientific publications. 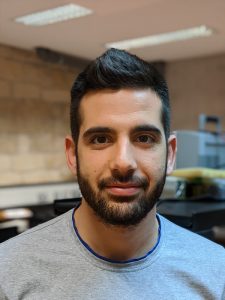 Giannis Antoniou, born 1995 in Larnaca (Cyprus), studied Mechanical Engineering at Cyprus University of Technology, specialized in Material Science and Engineering and graduated with a degree in Mechanical Engineering (4-year course) in June 2019. He conducted his undergraduate project in the Device Technology and Chemical Physics Laboratory by studying the effect of of doping π-conjugated polymers and small molecules with Lewis acid reagents through spectrophotometric methods. Following graduation, he continued his research activities in the same Lab, first as a research assistant and since September 2019 as a PhD student.

The topic of his PhD research project is based on the engineering and the characterization of organic photodetecting devices (OPDs). 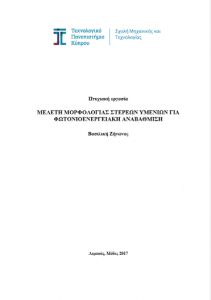 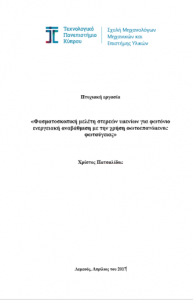 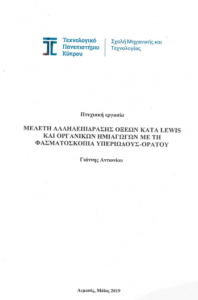 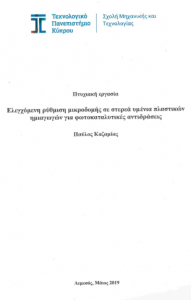 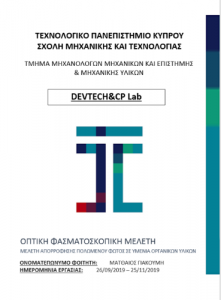 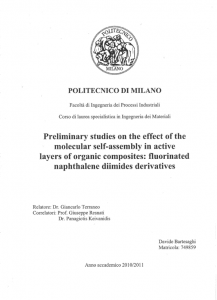 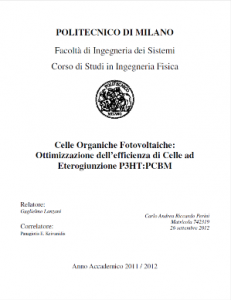 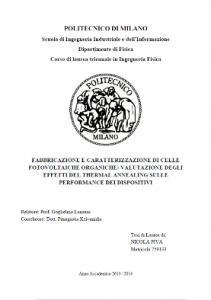 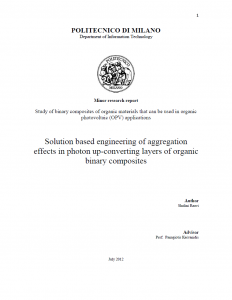 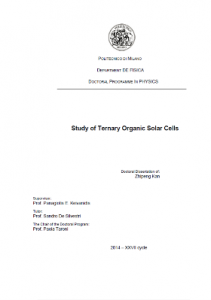 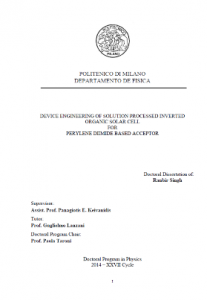 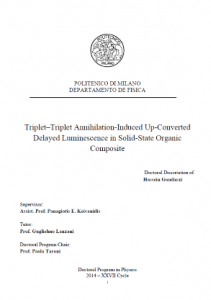 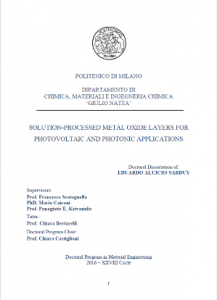 Dr Eduardo Aluicio-Sarduy is currently an Assistant Scientist at the University of Wisconsin‐Madison, USA 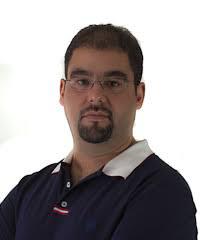 Loukas Koutsokeras has taken his first diploma from the department of Materials Science and Engineering at the University of Ioannina. He obtained a joint PhD (co-tutelle) between the department of Materials Science and Engineering (University of Ioannina, Greece) and the department of ´Physique et Mécanique des Matériaux´ (Université de Poitiers). The area of his doctorate studies was the structural and electronic characterization of transition metal nitrides in thin films. In the period between July 2019 – February 2020 he was involved as a part-time post-doctoral research associate in the research activities of the Device Technology and Chemical Physics Lab. Loukas was performing structural characterization experiments on organic composite films with the use of X-ray diffraction and scanning electron microscopy measurements.

Dr Aliaksandr Baidak is a Dalton Research Fellow & Lecturer, leading a research team in the Dalton Cumbrian Facility and Department of Chemistry, at University of Manchester, UK 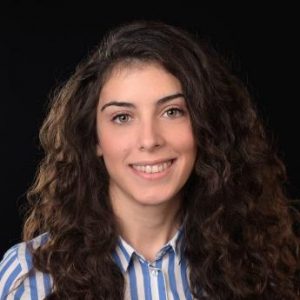 Between January 2019 – October 2020 Ms Despoina Kokkinidou was involved as a part-time research associate in the activities of the Device Technology and Chemical Physics Lab where she performed scanning electron microscopy imaging characterization on organic composite films. She is currently pursuing a PhD at the BioLISYS laboratory of the Department of Mechanical Engineering and Materials Science and Engineering at CUT. 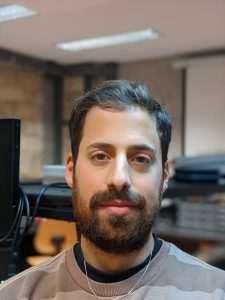 Christos Patsalidis, born 1992 in Nicosia (Cyprus), graduated in June 2017 with a degree in Mechanical Engineering (4-year course) from the Department of Mechanical Engineering and Materials Science and Engineering of Cyprus University of Technology. He conducted his undergraduate research project in the Device Technology and Chemical Physics Laboratory where he performed a spectroscopic study of triplet energy transfer reactions in solution processed solid films of organic composite materials. He held a laboratory assistant position in the same Lab in the period between March 2019 – May 2020

Dr Grigorios Itskos  is an Associate Professor in the Department of Physics at the University of Cyprus. In the period between 16/09/2013 – 15/12/2013 he was visiting the Device Technology and Chemical Physics Lab at CNST@IIT PoliMi during a sabbatical leave.

Any cookies that may not be particularly necessary for the website to function and is used specifically to collect user personal data via analytics, ads, other embedded contents are termed as non-necessary cookies. It is mandatory to procure user consent prior to running these cookies on your website.